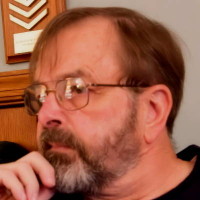 I know now I picked the wrong career path because I never settled anywhere until I started writing fiction. After a twenty-year career in the Navy, where I rewrote several ship's operation manuals and other instructions, I went on to work for a Virginia State Delegate, sold booze at Virginia ABC as Chief Administrator, and worked several years writing proposals and conducting financial analyses in support of government contractors. After becoming completely fed up interacting with both the Federal and State governments, I taught Principles of Accounting and eventually became a university administrator. I'm finally retired from everything except writing. And WVU is where I concentrate my online interaction.

I live in Virginia Beach, VA, with my first wife and only wife of many, many years. We have three offspring, two boys and one girl, and two grand girls. We are empty nesters except for our ten-year-old Scottish Terrier. I'm a graduate of Saint Leo University (BA), Old Dominion University (MSAccounting), and Golden Gate University (MBA). When I'm not writing or traveling, I'm reading anything from a history book to the back of a package, as long as the print's big enough.