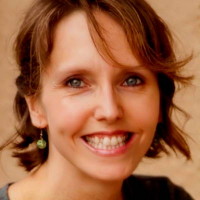 I started reading at the age of three, and I’ve been infatuated with books ever since. Trixie Belden and Nancy Drew introduced me to mysteries, and before the time I was ten I’d read all of Agatha Christie’s novels. I grew up in a small New England town, where I dreamed of three things: not freezing for six months out of the year, living in an art museum like the children in the classic story From The Mixed up Files of Ms. Basil E. Frankweiler, and being a writer.

After graduating from college, I taught English in Tokyo before moving to Honolulu, where I got my MA in Japanese Language & Literature from the University of Hawaii. I won’t lie: the warm weather had a lot to do with it! I continued to teach until I found a museum job and fell in love with a coworker. One day he was offered a position that required us to—wait for it—live at a different museum. So, of course, I married him. Because it was destiny, right?

Someday I hope to write a mystery series set in Hawaii, starring a plucky heroine who works at a museum. Right now, though, I’m working my way through all of the delectable WVU classes like a chocoholic in a candy shop! And while my day job is still at a museum, my stories have been published in a number of online and print publications, including Amsterdam Scriptum, Hiss Quarterly, Flash Me Magazine, Thereby Hangs a Tale, and Mouth Full of Bullets.